Decided to change things up with a video post. Check out my totally unscripted review of Kate Locke’s The Queen is Dead and Jessica Bacal’s Mistakes I Made at Work.

Was so caught up with school and work, I nearly forgot to post this… 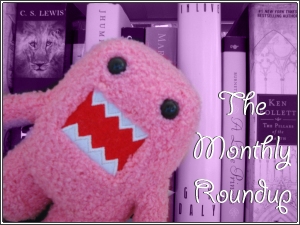 Read
The Temptation of the Night Jasmine by Lauren Willig
The Girls from the Revolutionary Cantina by M. Padilla
Old Photographs by Sherie Posesorski
Ruthless by Anne Stuart
Shades of Milk and Honey by Mary Robinette Kowal
Vixen by Jillian Larkin (B&N First Look)
The Way It Is by Donalda Reid

The Monthly Round-up is a regular feature wherein I list the books I read each month.

Alexia Tarabotti, half-Italian, on-the-shelf, and soulless, finds she is under no obligation to observe all the niceties of Victorian society, so why should she hesitate to order tea in another’s home when a proper tea is not forthcoming? Never did she imagine that something as simple as a request for tea and treacle tart could lead to her becoming involved in unraveling a mysterious plot that threatens the order of Britain’s supernatural citizens. Or that she would suddenly find herself  in the company of alluring, Scottish, and infinitely infuriating Lord Maccon, Alpha werewolf and BUR agent. Vampires! Werewolves! and Deadly Creatures! abound, but Alexia is ready for them with her trusty, silver-tipped parasol.

After the surge in trendy vampire fiction, I experienced what I have termed vampire fatigue–a curious condition sparked by exposure to too many black, red, and white jacketed, Twilight-esque books, leading to much scoffing and arguing on the merits (or lack thereof) of damsel in distress heroines and their pretty-boy vampire counterparts. Oh yes, it brings out the worst of my snobby book reviewer personalities.

Soulless is not one of those books. I love Victorian-inspired fiction. The Victorians have always been my favorites, and those who know me put up with plenty of Victorianisms on my part. When I first saw a post on Soulless, I knew I wanted to read it–spinsters, vampires, and werewolves in a Steampunky, alternate Victorian London? Yep, my kind of story.

In many ways, Soulless reminded me of what I loved best about Patricia Wrede and Caroline Stevermer’s Sorcery and Cecilia books–witty banter and a no-nonsense heroine who defies convention. It was a fun romp, and I instantly wanted to grab a copy of Changeless, the second in the series. I’ve avoided series for a while, but I’m looking forward to following this one :).

After reading Jane Austen’s unfinished last novel, Sanditon, for the Austenprose read-along, I was left with the need to know more about the characters that populated that quiet seaside resort town. I had put off reading Sanditon for that very reason–I knew that when I read it, I would be left wanting more and there would be no more to be had. Like the last bite of a wonderful desert, I would cherish the sweetness of that last bite but would be left unsatisfied. Like Austen’s other novels, Sanditon offers a look at the little dramas that mark small-town living. However, this time, Austen takes her readers away from the country to the coast when the observant Charlotte Heywood is invited to stay with the Parkers in their home in Sanditon, a budding seaside resort town that Mr. Parker hopes will become as lucrative as the more well-known bathing spots. In Sanditon, Charlotte is introduced to a fascinating cast of characters, from hypochondriacs to impoverished, but highly romantic wards. Sadly, we only get to know these characters briefly before the fragment ends.

However, in 1975, Marie Dobbs, under the pen name “Another Lady,” took up the challenge to complete Austen’s Sanditon and the result is a delightful and satisfying treat. Another Lady takes up her pen where Austen left off and continues the tale. There is no jarring shift in the narrative style, Another Lady adopts the language and style of Austen, developing the plot and characters in a careful and believable manner. Her Sanditon has all the fun and novelty of Catherine Morland’s adventures, Fanny Price’s astute observations, and the eventfulness Emma’s of close-knit town life.

After finishing Sanditon, I was in the mood for another social comedy, so I took up Ada Leverson’s Love’s Shadow (received from LibraryThing’s Early Reviewers program). A close friend of Oscar Wilde’s, Leverson’s style and tone is similar to Wilde’s biting, quick wit. Love’s Shadow offers an engaging look at the ludicrous things we do for love. Like Wilde, Leverson offers a meddlesome cast of characters whose actions only serve to confuse one another. At the heart of the story are the Ottleys, Bruce and Edith, a very ordinary middle-class Edwardian couple wishing for a little more excitement in their very ordinary lives. Edith’s friend, Hyacinth Verney has all the excitement and independence that Edith craves, but only wants for the attention of Cecil Reeve, a young man who only has eyes for a much older woman who refuses to indulge his fancy.

Love’s Shadow is a fast-paced, amusing romp, Leverson revealing the foibles of her characters in a series of vignettes. It almost reminds me of Colette’s Claudine and Annie, particularly the dissatisfaction that seems to accompany love as experienced by Edith and Hyacinth.

Reading Chris Tusa’s Dirty Little Angels is like delving into a story by Flannery O’ Connor–the characters are flawed and corrupt, their world is rotten with moral decay, and they are looking for God in all the wrong places.

Hailey, a tenth-grader with more to worry about than math tests, is caught in the midst of her family’s decline. Depression grips them all and there is nothing to be done about it. Her mother’s miscarriage, her father’s unemployment, and her brother’s delinquencies only add to Hailey’s sense that everything is falling apart, making the roaches buzzing in her head shred her mind to bits.

Looking for answers, Hailey finds her brother’s friend, Moses Watkins, an ex-con who wants to hand drive-thru salvation to the good people of New Orleans.

The story is gritty and dark. It’s not what I usually read, but I was intrigued by the summary when Mr. Tusa asked me to review the novel. I had read a few reviews that noted the frequent use of metaphors in the story; it can be distracting at times, but at times it adds to the reader’s understanding of Hailey’s confusion (the state of her decaying sense of self).

As I said, it is a dark novel–there is violence, poverty, and self-destruction. It can be hard to read and the characters are often hateful, making it hard to sympathize with their plight, but they are realistic in their flawed, emotionally impoverished state.

Though I have no plans to continue book blogging, I can still be found at marginalia and such and @booknerdcatlady